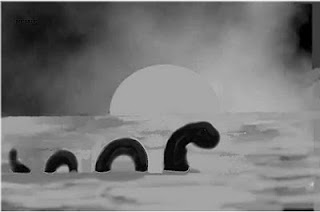 Péist, Péiste, Payshta. However you spell it or say it, Ireland’s legendary water monsters are horrible things. Early Irish legend is rife with these gigantic, jaw-snapping brutes, and according to local legends, they still swallow cattle and sheep and lure unfortunate humans into the lakes of Ireland to drown.

The word péist, which is Irish for worm, often connotes a reptilian creature akin to Nessie of Loch Ness fame. In Irish folklore, these beasts terrorized Ireland until a few brave saints subdued them with prayers, or great warrior heroes slew them with swords, often having to cut their way out of the Péiste's stomach after becoming the monster's lunch. 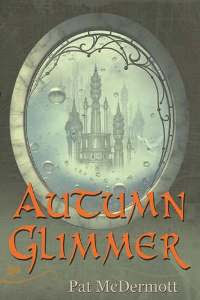 The Péiste makes a cameo appearance in Autumn Glimmer, Book Two in my Young Adult Glimmer series of Irish fairy adventures that include Glancing Through the Glimmer and A Pot of Glimmer. In the scene below, Ireland’s Prince Liam Boru, a seventeen-year-old storyteller, or shanachie, is walking with his American girlfriend, Janet Gleason, through the woods of his family’s County Wicklow estate. He tells her about the Péiste.


He returned the bottles to the backpack, and they left the bridge for an unpaved path still damp from last night’s rain. The leaf-strewn trail wound through a tunnel of golden ferns, ivy-tangled shrubs, and low hanging branches of beech and oak. Spider webs clung to the crooks of the trees; rainbows of oddly shaped fungi rose from rotting logs. Coaxed by gentle breezes, butterscotch leaves breathed their last and floated to earth in flickering sunbeams. In harmony with Glensheelin’s birds, a constant rustle, the rustle of autumn, filled the woodsy air.

Janet hopped over a puddle and hooked her arm through his. “You were saying about the Péiste?”

“The what? Oh. Right.” He knew the look well: she’d caught him dreaming. He pressed her arm against his ribs. “The word means worm, or dragon. In Irish folklore, the Péiste is a serpenty beast with a horselike mane down its back. They live in lakes and rivers and guard ancient treasures or the doorways to the Otherworld.”

“Ireland has lots of lakes.”

“And almost every one has a Péiste legend. Most of the stories are put down to eels or otters that grew larger than normal, or even wild horses off for a swim. The rest were undoubtedly made up by landowners trying to scare off trespassers, or by parents trying to keep their kids away from the water.”

“Makes sense. In Fintan’s tale, the monster ate fairies. Have you ever heard of that?”

“No. Fintan outdid himself last night. One of the first things he taught me was, don’t be afraid to embellish a tale when an audience sits in the palm of your hands. I suspect he went for terror, it being Halloween and all. Tonight should be even better.”

Janet made a shivering noise. “He sure got me.” She jumped at the sudden crackle of twigs to their left.

Liam peered into the gloom. A familiar form bustled off through the woods. “It’s only a deer. Not a monster.”

“I know. There are no monsters. Davin and the others have nothing to worry about when they go diving in the lake, right?”

*Photo courtesy of Photobucket
Posted by Pat McDermott at 3:59 PM