Sing Me That Story 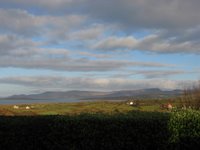 Last October I had the pleasure of attending a storytelling in remote West Cork. The hostess, an accomplished storyteller, has an outbuilding on her property dedicated to these magical gatherings. As I entered the big sturdy shed, I easily imagined being in Ireland centuries ago. No electricity lit the room. Candlelight set the mood. A semicircle of chairs quickly filled with guests not only from the local area, but from France, Germany, and Australia. The rules were simple: whoever held the chunk of amethyst ore the hostess passed around had the floor. He or she could tell a story, sing a song, play a tune, or pass the stone and simply listen. The mystical atmosphere captivated everyone, and all participated.

This Boston native held her own. With that purple rock securely in my hands, I sang about a young man from County Clare who wooed and won the girl he loved. The song was a story, as were all the tunes performed that night, and I realized how much those old songs have inspired my own writing. Many ideas from the Irish lyrics I learned growing up have found their way into A Band of Roses.

Isn’t every song a story? Especially in the Celtic countries. Words spring from the Celtic soul like sparks from a roaring peat fire. Whoever first put those words to the tunes drawn from the bottomless well of traditional music spawned a wealth of musical tales that spans generations. Romance, rebellion, ghosts and magic, drinking, death and emigration are only the beginning.

The old troubadours who carried news far and wide used rhymes in their story/songs to help keep their facts straight. Little good that did. In the late nineteenth century, Harvard Professor Francis James Child toured the British Isles and collected 305 distinct ballads, each with so many variations, his collection filled ten volumes. Modern fiction has nothing on the Child Ballads. We find Scottish lords disguised as beggars, and abandoned ladies going to sea dressed as cabin boys. Stalwart patriots, lovesick soldiers, outlaws and enchanted animals abound in these sometimes gruesome but always entertaining narrative songs.

Periodically, new generations “discover” old folk songs. Modern folk singers like Jean Redpath and Andy M. Stewart have recorded many Child Ballads as well as the romantic and political poem/songs of Robert Burns. These talented Scottish singers are among many who round out the Irish "trad" repertoire of performers like the Clancy Brothers and Tommy Makem, Planxty, Dervish, and Altan, to name a very few. Do you have a favorite?

Any writer experiencing “writer’s block” would surely find a cure in the venerable musical tales so lovingly presented by these artists. Of course, you don’t have to be a writer to enjoy them. Whether you read them, hear them, or perform them, they’re sure to fire your imagination.
Posted by Pat McDermott at 11:30 AM