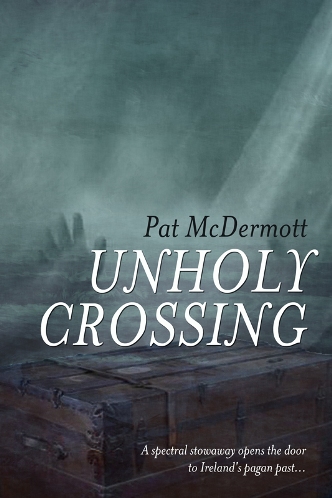 Who doesn’t love a good ghost story, especially one set in Ireland? A visit to Tubbercurry in County Sligo last summer inspired this one. It all began when my aunt, a Boston native, learned I planned to call on my cousin Michael, whom I hadn’t seen for years.


Years ago, my aunt lent a photo of her grandmother, my great-grandmother, to Michael’s mother Bridgie for inclusion in a historical publication. My great-grandmother was a schoolteacher, and the publishers wanted to feature her in a Who’s Who type section. Sadly, by the time I went over, Bridgie had passed away.

“Tell Michael I want that picture of my grandmother!” my aunt said. “Bridgie told me she put it in Grannie's old trunk!” (Grannie was Michael’s grandmother, my grandmother’s sister.)

Undaunted by family intrigue, Michael gave me a grand tour of the Tubbercurry area. We viewed the remains of the house where our grandmothers grew up, the ruins of the schoolhouse where our great-grandmother taught, and the cemetery where many family members rest. He knew nothing about the photo, though he knew about the trunk, stored in the ruins of a cottage near his childhood home.

“Look all you like,” he said when we arrived at the cottage. “But I’m telling you, my father wouldn’t touch that trunk, and neither will I.” 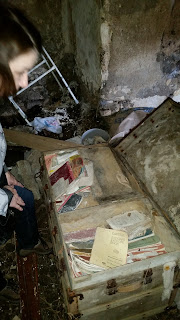 I'd no sooner opened the trunk when a shrieking flock of crows flew above us. The wind rose and tore off a piece of the old door. I thought it was great fun, but Michael quickly left the place and said he’d wait outside.

I never found the photo, nor did I care. The trunk had captured my imagination. I closed it up and wondered where it came from, how it got there, and what it had seen and heard. And let’s not forget the sound effects. Whether the crows and the wind were a coincidence, or whether Ireland had cast another of its spells, I had a story—if Grannie would let me use her trunk.

Apparently, she didn’t mind at all. Here’s the Blurb and an Excerpt from Unholy Crossing.

Blurb
A Spectral Stowaway Opens the Door to Ireland's Pagan Past...
It’s 1912, and America has lost its charm for Noreen Carbury, an educated young lady from Ireland. For five long years, Noreen has looked after the children of Boston’s well-to-do. Homesick and vexed by the gentry’s demeaning views toward immigrants, she schedules a voyage to visit her family in County Sligo.

Excerpt
The Laconia sailed east, past the islands in Boston Harbor. Soon she would turn northeast. Toward Ireland.

I unlocked my cabin door and gasped at the room’s icy temperature. Annoyed that the heater had failed to perform, I eyed the button that summoned the steward. As I crossed the room to push it, I glanced at the photos on the desk and froze.

What I’m telling you now is the truth, I swear. As I gazed at the portrait of Ned and me, a golden glow rose from the top of the silver frame. A dark-haired image appeared between us.

Had I drunk more wine than I should, you ask? On my word, I did not. The woman was there, in the portrait, staring. Staring at me. Smiling.

*A version of this post first appeared on The Celtic Rose
Posted by Pat McDermott at 10:08 AM