A Primer of Irish Slang 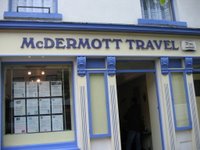 According to Dictionary.com, slang is "the jargon of a particular class, profession, etc." Several dictionaries suggest that the word "slang" originated from the Norwegian phrase "slengja kjeften" (literally, to sling the jaw). Whether it did or not, "sling the jaw" is a great phrase—and no one "slings the jaw" better than the Irish.

In my quest to make the characters in my stories sound more Irish, I tried writing dialogue by chopping words and adding apostrophes. That did little to get the wonderfully lilting accent I heard in my head onto a page so a reader could hear it the same way I did. What could I do?

My first trip to Ireland helped solve the dilemma. The tour guide handed out a list of Irish-English vs. American-English words to help us Yanks fit in with the locals (right.)

We learned that in Ireland a cookie is a biscuit. French fries are chips, and potato chips are crisps. Very nice, but irrelevant to my story. And then I found Slanguage.

I enjoyed reading the fanciful phrases in this wonderful book by Bernard Share. Drisheens, shinogues, and sheilamaids filled the pages, but such words weren’t useful if I’d need a glossary at the end of my book. Thankfully I found a treasure trove of terms that wouldn’t flummox a reader at all. The context in which I used them would easily define them, and a few key phrases would help round out my characters. With more than enough ammunition for several books, I got to work.

Revising my stories caused no botheration at all. In fact, it was easy cakes. The boat that had simply sunk was now gone for its tea. The fella merely in love developed a soft eye for his lady. And that idiot who’s always foostering about? What an eejit!

Should I chance my arm and bare a few of the naughtier terms? Come here and I’ll tell yez. A state of chastitution is sure to leave a fella’s privities banjaxed. To remedy the situation, he might give his girl a ride on his crossbar. But they should invite Rubber Johnny along or she’ll be up the flue.

At first I felt pig-ignorant exploring such a power of words, but now I think I can pass myself. Still, I’m only trotting after the true jaw-slingers. Mr. Share did me an obligement by writing his book, and I found several others packed with phrases that not only twisted hay with my imagination, they left me gobsmacked.

A Glossary of Irish Slang by Diarmaid Ó Muirithe, Dictionary of Cork Slang by Seán Beecher, and A Dictionary of Hiberno-English by Terence Patrick Dolan are only a few of the wonderful books out there. Then there are the web sites. Googling "Irish Slang" produces some entertaining results.

One of my favorite slang-related sites is http://www.overheardindublin.com/, a fabulous compilation of e-mails sent in by ordinary folks from their earwigging of real conversations in Dublin. The site has generated three (so far) delightful paperbacks: Overheard in Dublin, Overheard in Dublin Again, and More Overheard in Dublin. These books by siblings Gerard Kelly and Sinéad Kelly offer hilarious snippets of Irish life that will delight every dog and devil.

There. All done and dusted.
Posted by Pat McDermott at 11:19 AM