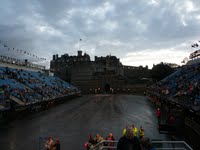 We stood in a long line leading up to Edinburgh Castle grateful for the hoods on our jackets. A round of Scottish showers dampened everything but our spirits. A rainbow burst acr 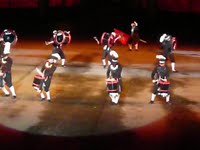 oss the roiling clouds as the line started moving, a good omen we hoped. The Tattoo would take place outdoors. As it turned out, the rain held off for the rest of the evening. We climbed the stands to seats facing the castle, the best seats in the house, courtesy of our pampering cruise line.

Scotland first presented The Edinburgh Military Tattoo in 1950. The Tattoo's current patron is Anne, Princess Royal. With an annual audience of over 200,000 and 100 million viewers watching on international television, this electrifying event is generally consid 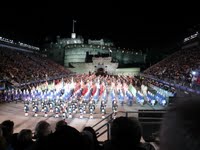 ered the biggest and best Military Tattoo in the world.

"Tattoo" in the military sense has nothing to do with puncturing the skin to create indelible designs. The word comes from "Doe den tap toe," a Dutch phrase meaning "put the tap to" or "turn off the tap." In th 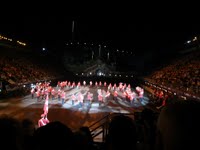 e Lowland Countries during the 17th and 18th centuries, the cry told tavern owners it was time to turn off their ale taps. The British Army, stationed in Flanders during the War of the Austrian Succession, adopted the phrase and transformed it into a ritual performed by their drummers and pipers each night to round up their troops. The "Tattoo" soon became the last duty call of the day and eventually came to mean an evening performance by military musicians. 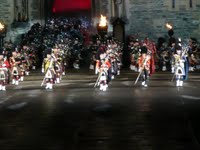 And a performance is what we got. I expected the splendid show of hundreds of kilts, bagpipes and drums. I didn’t realize we’d see military bands from all over the world, including the South Sea Island of Tonga, Switzerland, China, South Africa, and Australia. A thrilling flyover by a Royal Air Force jet 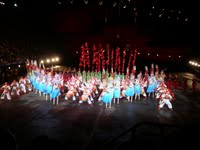 began the show. Marching bands then entered the esplanade with the torchlit castle providing a backdrop for ingenious light shows and an occasional display of fireworks. This year’s Tattoo coincided with the 250th anniversary of the birth of Robert Burns, and members of the Royal Scottish Academy of Music and Drama treated us to special presentations of his so 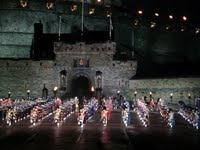 After the big finale, the chilling sound of the Lone Piper playing from the top of the castle signaled the end of the pageant. The March Out had everyone in the stands cheering. In high spirits, we made our way back to the ship. We'd seen The Tattoo!

Check out this video of Switzerland's Top Secret Drum Corps!