From Fairies to Giants: A Story in a Story 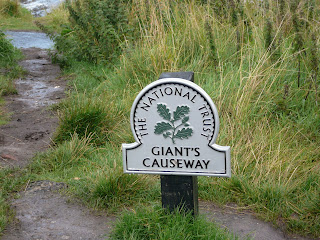 Ireland’s fairies star in my young adult novel, Glancing Through the Glimmer. Who are the fairies? Where did they come from?

According to one legend, the Celts, the ancestors of the modern Irish, arrived in Ireland 1700 years before Christ and defeated the magical Tuatha de Danann, the Tribe of the Goddess Danu. One of the Danann leaders, a womanizing rascal named Finvarra, negotiated a truce with the Irish that gave the Dananns half of Ireland—the bottom half.

Finvarra became the King of the Connaught Fairies, and though he loves his wife, Queen Oona, he prefers to dance with ‘grippable’ mortal women. He’s been known to kidnap them, as Janet, an American teenager living in the modern Kingdom of Ireland, learns to her dismay in Glancing Through the Glimmer.

Janet is on her first date with Liam and doesn’t know he’s the King of Ireland’s son. Seventeen-year-old Prince Liam is not only a scholar, he's also a storyteller, or shanachie. His talent for telling tales helps him rescue Janet from Finvarra and his gang, who are partying in an underground cave north of Dublin. Finvarra knows Liam for a shanachie and demands a story.

Liam eyed his peewee host and pint-sized audience. The perverse idea of telling them a story about giants appealed to him. He began with the standard "long, long ago" and eased into the tale of the giant Finn MacCool’s encounter with his Scottish rival, Benandonner. 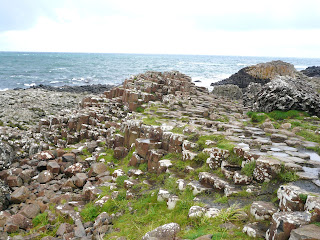 Liam told an old folktale that offers one explanation for the origin of the Giant’s Causeway, a spectacular stretch of Irish coast in north Antrim. The Causeway is supposedly all that remains of a bridge Finn MacCool formed long ago to link Ireland and Scotland. Finn who, you ask?

Finn MacCool was the leader of a roving band of gallant warriors who lived in Ireland centuries ago. He and his comrades appear in many entertaining tales. The legend concerning the Giant’s Causeway depicts him as a mighty giant who challenged his Scottish counterpart, Benandonner, to a contest of martial skill.

"Finn shouted across the sea to Scotland and challenged Benandonner to do battle. The two had never met. Now Finn being a thoughtful sort, he set a trail of mighty stones into the sea between Scotland and Ireland so Benandonner might keep his feet dry when he came."

Finn expected a sporting fight, some fun and entertainment, but when he saw the monstrous size of the approaching Scottish titan, he ran in terror to his wife and asked her to hide him.

"She dressed him as a baby and placed him in a giant cradle. Benandonner entered their house, and when he saw what he thought was an infant, he screamed in fright. ‘If this is the baby, why, the father must be huge indeed!’"
The fairies belly-laughed at Liam’s theatrical imitation of the terrified giant’s hasty retreat to Scotland. "He tore up the stepping stones as he went so Finn couldn’t follow." 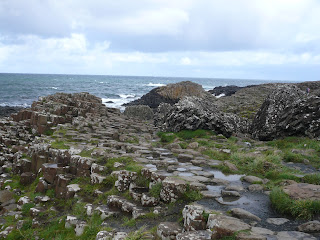 The stones that Benandonner left in his wake formed the Giant’s Causeway. Having seen this amazing World Heritage site, I prefer this enchanting version of its origin, though geology tells a less fanciful story.﻿

The Giant’s Causeway is part of the Antrim Plateau, the largest lava plateau in Europe. Its massive cliffs are the result of volcanic activity that occurred 60 million years ago. Lava filled a river bed and cooled slowly, cracking into columns and forming unusual structures with intriguing names like the Giant’s Boot, the Chimney Tops, and the Giant’s Organ. (Nothing anatomical here - it seems Finn created a pipe organ for his son, Oisin, to play).

Liam paused. Benandonner had given him an idea. He must rip up stones, so to speak, to keep the fairies from following him. He decided to give his story a brand-new ending.

Glancing Through the Glimmer / Available in Print and eBook from
Amazon U.S.
Amazon U.K.


(This post first appeared on Flowers on the Fence)
Posted by Pat McDermott at 9:12 PM