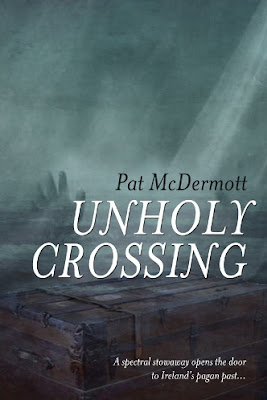 A spectral stowaway opens the door to Ireland's pagan past...

So reads the tagline for my new novella/novelette, Unholy Crossing, a ghost story nestled into a tale of emigration and homecoming. Sincere thanks to cover artist Nika Dixon, who has produced another masterpiece for my characters and me. Here's the Blurb:

It’s 1912, and America has lost its charm for Noreen Carbury, an educated young lady from Ireland. For five long years, Noreen has looked after the children of Boston’s well-to-do. Homesick and vexed by the gentry’s demeaning views toward immigrants, she schedules a voyage to visit her family in County Sligo.


Enjoy an Excerpt
Posted by Pat McDermott at 11:48 AM