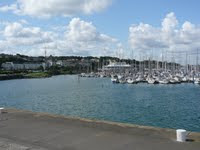 "Howth is Magic" says the current tourist brochure for Ireland's maritime gem on the northern fringe of Dublin Bay. I love visiting Howth, but we almost didn't make the nine-minute train ride this trip. We've been there so often, I thought perhaps we should try someplace different. But Mike said "Let's go," and after a late breakfast at Bewley's on Grafton Street, we caught t 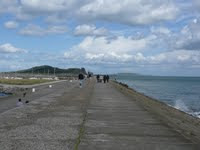 he DART at Pearse Station. The decision was a good one. There's no better cure for jet lag than a walk out on the east pier followed by a visit to the venerable Abbey Tavern for classic Irish refreshment.

Howth is a picturesque village on the peninsula of Howth Head, which juts out over the northern part of Dublin Bay. Once a small fishing village, Howth has evolved greatly over the years. The boats still bring in the freshest seafood around, yet upscale restaurants and shops lure tourists from all over the world. The grounds of Howth Castle now include a luxury hotel and the largest golf course in Ireland. A marina filled with sailboats graces the harbor. And the scenery . . . oh, the scenery. 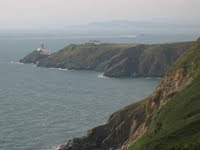 The cliff walks have lured many hikers, including me, to view sights that haven't changed in ages. When Mike and I trekked along those heathery cliffs a few years ago, I easily pictured Viking ships hurtling in to attack as they did in the ninth century. No need to do battle nowadays, however. Howth's property prices would knock the wind out of those Viking sails in a flash. In fact, I chose Howth as Prince Peadar Boru's fictitious home in A Ba 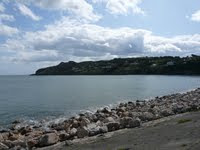 nd of Roses. Peadar's imaginary mansion would fit right in with the elegant homes overlooking Balscadden Bay from Howth Head.

One of my favorite stories about Howth concerns Pirate Queen Grace O'Malley. According to the legend, she was cruising home from England in 1576 and stopped to lodge at Howth Castle for the night. The Earl of Howth turned her away. Infuriated by the breach of hospitality, she kidnapped the earl's grandson and heir and sailed home to Mayo. She returned the boy once the earl met her unique ransom demand: he must never rebuff unexpected guests again. To this day, the gates of Deer Park, the earl's demesne, are always open, and an extra place is set each night at the castle's dinner table.