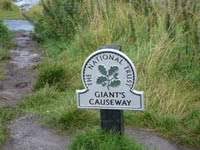 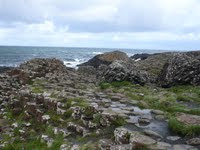 by the giant Finn MacCool to link Ireland and Scotland.

The main hero of the Fenian Cycle of Irish mythology, Finn led the Fianna, a band of warriors who roamed around Ireland in the third century AD. 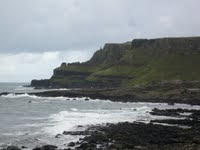 Finn shows up in many entertaining tales. The legend concerning the Causeway depicts him as a mighty giant seeking to do battle with his rival, the Scottish giant Benandonner. Being a hospitable sort, Finn set a series of huge stepping stones acros 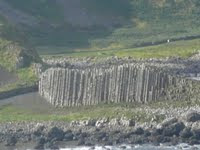 s the Irish Sea to allow Benandonner to come over to fight without wetting his feet. But when Finn saw the monstrous size of the approaching giant, he ran home and asked his wife to hide him. She dressed him as a baby and placed him in a giant cradle. When Benandonner saw what he thought was an infant, he concluded that the child’s father must be huge indeed. Terrified, Benandonner fled back to Scotland, tearing up the stepping stones as he ran so Finn couldn’t follow. 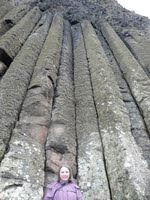 The geologists tell a less fanciful story. The Causeway is part of the Antrim Plateau, the largest lava plateau left in Europe. The massive cliffs projecting into the Atlantic Ocean are the result of volcanic activity that tranpsire 60 million years ago. Lava filled a riverbed and cooled slowly, cracking into p 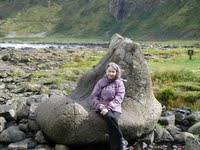 olygonal columns and forming unusually shaped structures with intriguing names like the Giant’s Boot (pictured with me sitting in it) and the Giant’s Organ (nothing anatomical here - it seems Finn created a pipe organ for his son Oisin to play).

Our visit to the Causeway, a World Heritage site we’ve wanted to visit for years but couldn’t seem to fit into our travels, was a shore excursion offered by our cruise line. We visited Antrim during typical Irish weather: blue skies one minute, rain the next. Lot 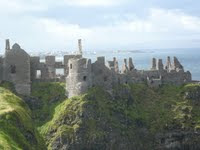 s of folks got wet, but everyone was smiling. We saw several rainbows before returning to our tour bus for a drive down the lovely Antrim coast. 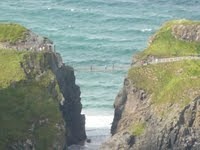 After a delicious lunch at a local hotel, we stopped briefly at the remains of historic Dunluce Castle and viewed the Carrick-a-Rede Rope Bridge, which we did not cross. Back to the ship we went to prepare for the next day’s tour: Liverpool.
View the video of the Causeway's gorgeous sweep!

Posted by Pat McDermott at 4:33 PM