The Hill of Tara and Brú Na Bóinne 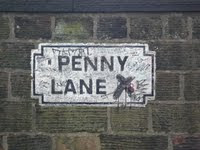 Our brief stop in Liverpool surprised me. The lovely parks and blend of old and modern architecture we viewed "In the Footsteps of the Beatles" quickly dispelled our ideas of a sooty, industrial city. We had great fun seeing the haunts and homes of John, Paul, George, and Ringo, including a museum dedicated to their rise to stardom. 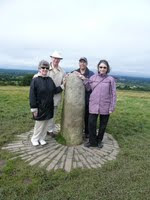 By the next morning, our ship had crossed the Irish Sea and berthed in Dublin Port. We set out early with my aunt and uncle for a day trip back in time, to the royal county of Meath. Our tour began with a visit to the Hill of Tara, seat of the High Kings of Ireland. Here w 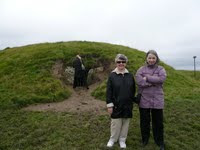 e are with the Lia Fáil, the Stone of Destiny, said to roar when the rightful High King touched it, though it remained silent beneath our reverent touch. Our knowledgeable tour guide described the standing stones, King Cormac's House, and the Mound of the Hostages, pictured to the right behind Diane and me. Despite years of excavation, much remains unknown about this mystical site.
Our next stop was UNESCO World Heritage Site Brú Na Bóinne, Irish for the Palace of the Boyne, often 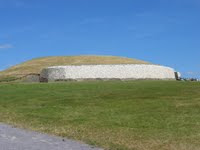 referred to as the Bend in the Boyne, more comm 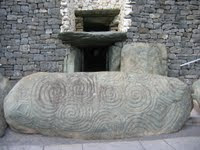 only known as the Boyne Valley. This fertile area of County Meath contains the remains of forty or so neolithic passage tombs built around 3,000 B.C., which makes them over 5,000 years old, older than the pyramids of Egypt. The enormous megalithic tombs of Newgrange (pictured), Knowth, and Dowth dominate the landscape. Mike and I had visited Newgrange twice, but this was our first visit to Knowth, where the largest number of tombs to date have been excavated. The ancient people who built them constructed the famous facade of Newgrange from white quartz they quarried fifty miles south in the Wicklow Mountains. 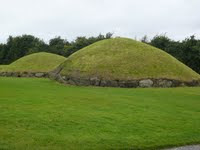 Passage tombs are found throughout Atlantic Europe, particularly in France and Brittany. They are circular mounds containing a passage and at least one chamber. The mounds are encircled by kerb stones, 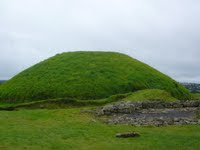 many of which display mysterious designs and carvings.
The Knowth complex lies at the western end of Brú Na Bóinne. The massive passage grave is ringed by 127 large kerb stones decorated with 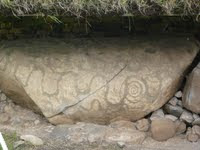 neolithic artwork. Visitors are allowed partway inside for a glimpse into history. After we enjoyed the eerie sight, we climbed to the top of the mound and 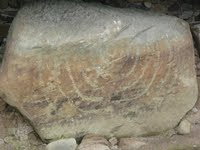 enjoyed a breathtaking view of the valley. Wondering how the area had looked 5,000 years ago and what the people who'd lived here were like, we wandered around the ancient mound and its eighteen satellite tombs until it was time to
return to the ship. 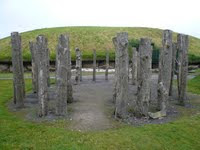 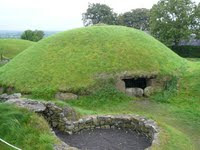 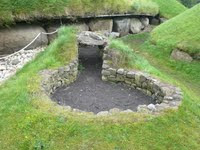 Posted by Pat McDermott at 9:11 PM