A Visit to the Beara Peninsula and Killarney 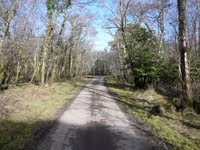 A problem with our rental car delayed our next outing. We had to drive to Kerry Airport to exchange vehicles, and it took so long we knew we wouldn’t see the entire Beara Peninsula as we'd planned. We’d see what we could, however. I’d visited Beara before, though my husband never had. I wanted to show him the village of Eyeries and the writing retreat whose hospitality I'd enjoyed, and I wanted to see parts of the area I'd never seen. With the rental car business squared away, we headed back to Kenmare and entered the gloriously rugged West Cork region.

Gertrude, our gallant GPS, did a commendable job with her new Irish maps until we reached Beara. The place completely baffled the poor thing. What should have been a simple drive around a modest peninsula quickly deteriorated into "direct routes" through obscure trails and elusive villages that were on the map but probably only appeared every seven years. 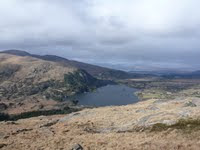 Eventually we unwound ourselves from the maze and found Healy Pass, a high winding road that runs from Lauragh in County Kerry to Adrigole in County Cork, cutting through the 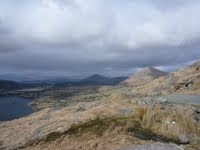 Caha Mountains. Perhaps it was because my husband was driving and I had no sense of control, but I couldn’t help imagining the car slipping over the edge of the road and plunging down the cliffs. 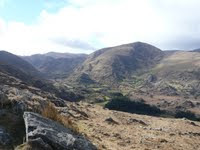 We stopped at a lofty overlook. Once I was out of the car, I felt safe enough to enjoy the spectacular scenery—but we had to get back down. What would happen if we met a car coming the other way? One of us would have to back up for miles. One of us would surely plunge. My bet would be on the Yanks driving backwards on the "wrong" side of the bicycle path road.

But we reached Adrigole at last having met only two other cars in spots where we could pull over and let them pass. We continued on to Castletownbere and stopped for lunch, assured by the owner we’d never find fresher haddock anywhere. He was right. 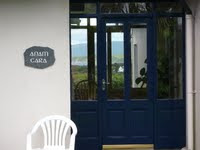 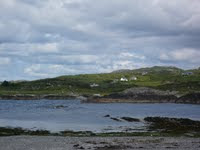 After lunch, we drove to Eyeries. Sadly, Sue Booth-Forbes, owner, director, and all around wizard of the Anam Cara Writer’s and Artist’s Retreat, was away on a family matter, but we viewed the house, Coolagh Bay, and the town. Only the occasional mooing of cows disturbed the peace. I wished we could linger and walk on the bogs, but the afternoon was fading fast. Perhaps we'd see the rest of the peninsula another time. 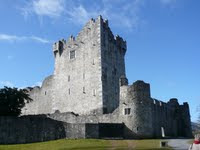 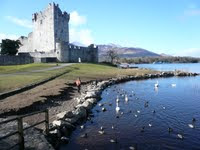 The next day we stayed in town for a walk in Killarney National Park. Fine blue skies and warmer temperatures graced our stroll to Ross Castle. The last time we’d seen the castle, scaffolding covered most of it. The renovations are complete, 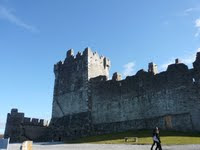 and though the old fort was closed 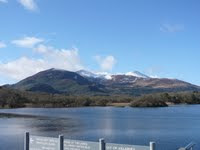 for the winter, we had a wonderful tour of the grounds and a walk through the park.

That evening, we attended the traditional Irish music festival that had been our excuse to visit Ireland this time. After three great concerts, we returned to our hotel room to pack.

Gertrude got us safely back to Limerick the next afternoon. We strolled into town, and I picked up a few books for writing researc 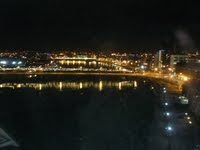 h. I nearly shrieked when I saw The Mammoth Book of Irish Romance, the new anthology containing a story I wrote, in one of the bookstores!

Our hotel room overlooked the Shannon River, beautiful at night. Our flight to Boston wouldn’t leave until the following afternoon, but I was already wondering how soon I could return.
Posted by Pat McDermott at 1:48 PM