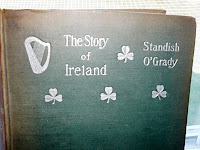 Some argue that “Alternative History” is more grammatically correct, but “Alternate History” has emerged as the common name for an interesting sub-genre of fantasy fiction. The “what if” asked by so many authors has produced a wealth of thought-provoking tales.

What if the Roman Empire hadn’t fallen? What if the American Revolution had failed? What if Germany had won World War II, or if Russia had reached the moon first?
In The Story of Ireland, published in 1894, historian Standish O’Grady wrote:

The kings of all our European nations came up as the result of an immense amount of fighting between small kings and between powerful families, each of which thought it had the best right to be the Royal Family . . . If Ireland had been left to herself a King of Ireland and a Royal Family of Ireland would have come up in the long run out of those wars, just as out of the wars of the Saxon nations of England the King of the English at last appeared.

What if Ireland had been left to herself?


I wondered about that long before I found Mr. O’Grady’s work in my aunts’ amazing library of Irish books. As a second generation Irish American, I will never know what it is to be truly Irish. My childhood vision of Ireland was one of magical legends and ancient kings, banshees and leprechauns, rebels and outlaw heroes. The first time I saw the real Emerald Isle, the palm trees astonished me—and that wasn’t the only jolt to my flawed concept of modern Ireland.
I longed for the Ireland I knew through song and story. My aunts had assured me our family had descended from Irish royalty, kings and queens long gone but hardly forgotten. How could such great men and women simply vanish?
What if they were still around?

In 1002 A.D., the chieftain of an obscure Irish clan rose to claim the High Kingship of Ireland. Brian Boru united Ireland’s warring tribes under one leader for the first and only time in Irish history. A scholar as well as a warrior, King Brian rebuilt churches, encouraged education, repaired roads and bridges, and roused the country to rise against the Norse invaders who had ravaged Ireland for centuries.
On Good Friday in 1014 A.D., Brian’s army challenged a host of Vikings and their allies on the plains of Clontarf. Though his troops were victorious, Brian’s son and grandson perished in the battle. Brian himself died as he prayed in his tent, murdered by fleeing Vikings who stumbled upon his camp.
Many historians have speculated that Ireland would be a different place today if Brian Boru and his heirs had survived the Battle of Clontarf. A Band of Roses presents one possible scenario.

So begins the preface of A Band of Roses, Fiery Roses, the forthcoming third book, Salty Roses, and my recently completed young adult novel, Glancing Through the Glimmer. In each of these stories, King Brian Boru survived the Battle of Clontarf and founded a dynasty that still rules modern Ireland. Along with a lovable cast of heroes and villains, the Boru clan encounters a blend of adventure, intrigue, and romance one reviewer called “a well-written and fascinating package that will appeal to a wide range of readers.”