The Town of Westport, County Mayo, served as our base of operations during our recent visit to Ireland. As Westport is only 80 miles north of Shannon Airport, we drove up the day we flew in. 80 Irish miles are a lot longer than 80 New Hampshire miles, and we were jet-lagged and driving on the “wrong” side of the road, but we had Gertrude, our trusty GPS, and we planned to stop in Tuam to visit the King of the Connaught Fairies.
Tuam, a small town in the Province of Connaught, lies about 20 miles northeast of Galway City. The name is derived from the Latin word tumulus, which means burial mound. Back in the Neolithic and Bronze Ages, the inhabitants used the area as a burial ground.
According to legend, St. Jarlath founded a monastic settlement there in the early 6th century after his abbot told him to "Go, and wherever your chariot wheel breaks, there shall be the site of your new monastery.” Jarlath's wheel broke at Tuam, and to this day the town has a broken chariot wheel as its heraldic symbol.
In the 11th century, the O’Connor kings of East Connaught built a castle in the town. They wasted no time defeating the O'Flaherty chieftains of West Connaught and became the Kings of All Connaught—at least above the ground.
The Annals of the Four Masters states that the Milesians, the ancestors of the modern Irish, arrived in Ireland 1700 years before Christ. They defeated the Tuatha de Danann, the magical Tribe of the Goddess Danu. Most of the Dananns left the Emerald Isle, though some opted to stay. They became known as the Daoine Sídhe (Deena Shee), the People of the Mounds. Their leader, a womanizing rascal named Finvarra, negotiated a truce with the Milesians that gave half of Ireland to the sídhe—the bottom half. The sídhe could stay as long as they remained underground. For the most part, they complied, living in great subterranean palaces. Eventually, they became known as the fairy folk, and for all we know, they’re still there.
Finvarra, the King of the Connaught Fairies, allegedly lived near Tuam in a palace beneath a hill called Knock Ma. Recent archaeological evidence has uncovered many ancient tombs on the hill. Tradition holds that among them are the tombs of Ceasair, the granddaughter of Noah of Noah’s Ark fame, and Maeve, the Iron Age Queen of Connaught. (Maeve is supposedly buried in Sligo too, but hey.) I wanted to stop and see Knock Ma, as I included both the hill and King Finvarra in Glancing Through the Glimmer, the young adult novel I recently completed.
Finding Knock Ma proved difficult for two tired Yanks, however. We spotted a mailman beside a green An Post truck and stopped to ask for directions.
“Do you know a place called Knock Ma?”
“I do indeed,” sez the red-haired postman. “Are yez thinkin’ of takin’ a hike?”

﻿We turned down a side street and found an agitated woman in the middle of the road brandishing a closed umbrella, as if telling us to move on quickly. An odd sight, but we are still jet-lagged and starting to remember we are now in Ireland, on Irish time, and approaching a fairy fort. We waved at the woman and passed by her, stopping up the road to take a few pictures of Knock Ma. The hill was vast, much bigger than I expected, green, lovely, and dotted with neat little houses and lazy cattle. We turned around and pulled over for one last picture. The woman with the umbrella ran up to the car, and we rolled down the window.
﻿﻿﻿﻿﻿﻿﻿﻿﻿﻿
“Are yez in a hurry?” sez she.

“No,” sez I, thinking she might want to chat. Wrong answer. 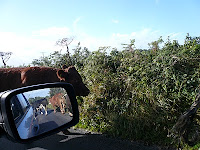 “Well the cows are coming!” sez she. “Pull over! Pull over now!” 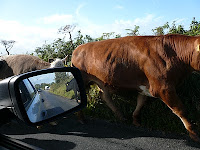 We looked up and saw a herd of brown cows galloping straight at us. Apparently the woman and her umbrella had been trying to clear the road to make way for this bovine charge. My husband edged the car as close to the fence as he could, and we stared in horror, expecting to die in the stampede, our rental car damaged beyond hope, poor Gertrude devoured in a single chomp. But the cows stumbled by and gave us an entertaining show. 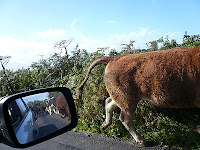 Laughing but tired, we followed the mailman’s directions and found the start of the Knock Ma walking trail. The weather was clear, so we parked and thought we’d stroll for a bit. We didn’t get far before a sign warning hikers to leave nothing valuable visible in their cars made us turn back. Our luggage was blatantly conspicuous in the rear of the hatchback rental car, Gertrude was on the windshield, and we really were too exhausted for an extended hike. We’d just have to come back some day. Happy that we got to see Knock Ma at all, we enjoyed a late breakfast in Tuam town and drove on to Westport. 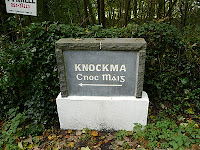 Posted by Pat McDermott at 2:28 PM