A Most Feminine Sea Captain

﻿﻿﻿﻿﻿﻿The Town of Westport (Cathair na Mart in Irish: the City of the Beeves) is nestled on the Atlantic coast of western County Mayo, the heart of Pirate Queen Grace O'Malley's territory. Westport is one of Ireland’s few planned towns. In the eighteenth century, the Browne family, owners of the magnificent Westport House, commissioned James Wyatt to design the town to accommodate their workers and tenants. The Brownes are direct descendants of Grace O’Malley, and Westport House stands atop the remains of one of her many castles. Her dungeons are still beneath the house, and we viewed them as part of the self-guided tour we recently enjoyed for the second time.﻿﻿
﻿
﻿

﻿﻿
﻿ ﻿
Before visiting Westport House, we spent a pleasant morning strolling the flower decorated stone bridges crossing the Carrowbeg River, the lovely tree-lined Mall, and the town’s inviting streets. We reacquainted ourselves with favorite shops and pubs before stopping into the Tourist Office for a schedule of the ferries that ran to our destination for the next day: Clare Island, the onetime headquarters of Grace “Granuaile” O’Malley. That evening, we attended a Sean-nós dance presentation called Granuaile, loosely based on the life of—you guessed it—Grace O’Malley.
﻿
The next morning, we drove to Roonagh Quay and caught the ferry for a twenty minute ride across Clew Bay. A rainbow shot over the sea as we approached the hills and cliffs of Clare Island, whose most famous resident was sixteenth century chieftain Grace O’Malley. We went ashore and headed straight to the remains of her castle. The square tower wasn’t as big as I expected, but it was still spectacular to see.
﻿﻿﻿
﻿
﻿﻿﻿
﻿﻿

﻿﻿﻿
Born around 1530, Grace O'Malley was the only child of Dudara “Black Oak” and Margaret O'Malley. The O'Malley clan had ruled over the Clew Bay area for centuries, making their living as seafaring merchants. Even as a young girl, Grace wanted to follow her father to sea. Her parents tried to dissuade her, stating as one of their arguments that her hair would become ensnared in the ship’s rigging. Undaunted, Grace cut off her hair, earning her the nickname Grainne Mhaol, or Grace the Bald, later shortened to Granuaile. She sailed with her father, and legend has it that on one voyage, pirates boarded their ship. Grace saved her father’s life by jumping on the back of a pirate who threatened him. Her refusal to accept English rule eventually landed her at the court of Queen Elizabeth I, where she was received as a queen in her own right. Grace and Elizabeth died in the same year, 1603.
﻿
﻿

Soaking up the history around us, we hiked along roads bordered by buzzing hedges of brilliant red fuchsia, coming at last to the Clare Island Abbey, which houses a canopied tomb in which Granuaile is supposedly interred. The ancient church was locked, but we explored the grounds and hiked some more before returning to the harbor. Too late for the early ferry and much too early for the last ferry, we thought to find a pub or restaurant, but tourist season was past and the restaurants were closed. We met a couple from Dublin in the same proverbial boat, and together we prevailed upon a local hotelier to open up for us. Drinks in hand, we shortened the rest of the afternoon by exchanging delightful tales with our new friends.
Another rainbow arched across the sky when we returned to Westport, a good omen for the next day’s jaunt to Connemara. 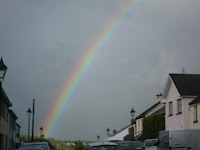 Posted by Pat McDermott at 4:18 PM