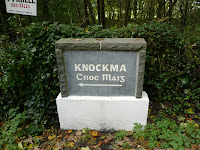 When the ancestors of the modern Irish arrived in Ireland 1700 years before Christ, they defeated the Tuatha de Danann, the magical Tribe of the Goddess Danu. The leader of the Dananns, a womanizing rascal named Finvarra, negotiated a truce with the Irish that gave them half of Ireland—the bottom half. And so, the Dananns became known as the Daoine Sídhe (Deena Shee), the People of the Mounds.

Finvarra supposedly lives in a palace beneath a hill in Galway. During a recent trip to the Emerald Isle, I stopped by this hill, called Knock Ma (See my post, Knock Moo). I wanted to see Finvarra's home, as he costars in Glancing Through the Glimmer, my young adult adventure coming soon from MuseItUp Publishing. I didn't meet him that day, but the local postman assured me that he and his fairy troop were there.

Here is a wonderful old Irish tale starring Finvarra, the King of the Connaught Fairies.

As everyone knows, the beauty of mortal women attracts the fairies. Finvarra, the King of the Connaught Fairies, enlisted his minions to find and abduct the prettiest ladies in Ireland. The fairies bewitched the loveliest women and brought them to Finvarra’s crystal palace beneath Knock Ma in Galway. The women heard only fairy music, which lulled them into a trance. They remained enchanted, forgetting about mortal life and living as if in a dream.

Long ago, in that part of the country, a great lord had a comely wife called Enya. He held feasts in her honor and filled his castle from dawn till dusk with music. Lords and ladies danced with great pleasure in Enya’s honor.

At the merriest part of the feast one evening, Enya entered the dance. She wore silver gossamer bound with jewels that outshone the stars in heaven. Suddenly, she released the hand of her partner and fell to the floor in a swoon.

The servants carried her to her chamber, where she lay insensible all night. At dawn, she awoke and told them she’d spent the night in a beautiful palace. "Oh, how I long to go back to sleep and return there in my dreams!"

The servants watched her all day, and she fared well enough, but when evening fell, they heard music at her window. She fell again into a trance from which no one could rouse her.

The young lord set Enya’s old nurse to sit with her, but the silence enticed the woman to sleep until dawn. When she looked at the bed, she saw to her horror that Enya had vanished.

The household searched the castle and gardens but found no trace of Enya. The young lord sent riders into the wind, but no one had seen her. He saddled his chestnut steed and galloped away to Knock Ma to speak to Finvarra, the King of the Fairies, for he and Finvarra were friends. Many a keg of good wine did the young lord leave outside his castle to quench the thirst of the fairies. Finvarra would surely have tidings of Enya.
But little did the young lord know that Finvarra himself was the traitor.

When the young lord stopped by the fairy rath, he heard voices in the air: "Finvarra is happy now, for in his palace he has the bride who will never more see her husband’s face."

"Aye," spoke another. "Finvarra is more powerful than any mortal man, though if the husband dug down through the hill, he would find his bride."

The young lord swore that devil nor fairy nor even Finvarra himself would stand between him and his bride. He sent word to every able-bodied man in the county to come with their spades and pickaxes, and they dug to find the fairy palace.

They made a deep trench, and at sunset they quit for the night. But the very next morning they found that the clay was back in the trench, as if the hill had never been dug.

The brave young lord asked the men to continue their digging, and they dug the trench again. For three days they dug with the same result: the clay was put back each night, and they were no nearer to Finvarra’s palace.

The young lord prepared to die of grief, then he heard a whisper in the air: "Sprinkle the soil you have dug with salt, and the salt will preserve your work."

He scoured the countryside for salt. That night, his men salted the soil they had dug that day. At dawn, they awakened to find the trench safe and the earth untouched around it.
The young lord knew he had beaten Finvarra. He bade the men dig, and by the next day, they’d cut a glen right through the hill. When they put their ears to the ground, they heard fairy music, and voices floated on the air.

"Now," said one, "Finvarra is sad, for if those men strike a blow on his palace, it will crumble and fade away."

"Then let him surrender the bride," said another, "and we shall all be safe."

Then Finvarra himself spoke clear as a silver bugle: "Stop!" he said. "Lay down your spades, mortal men, and at sunset the bride shall return to her husband. I, Finvarra, have spoken."

The young lord commanded his men to stop digging. At sunset he mounted his chestnut steed and rode to the top of the glen, and just as the sun turned the sky blood-red, Enya appeared on the path. He lifted her to the saddle, and they rode to the castle like storm wind.

But Enya spoke not a word. Days passed, then months, and she lay on her bed in a trance.

Sorrow fell over the castle. The young lord and his people feared the enchantment could not be broken. But late one night, when he rode in the dark, he heard voices in the air.

"It is now a year and a day since the young lord reclaimed his bride, but she is no use to him. Though her form is beside him, her spirit is still with the fairies."

Another said, "She will be so until he breaks the spell. He must loosen the pin from the girdle she wears at her waist, and then he must burn the girdle. He must throw the ashes before the door and bury the pin in the earth. Only then will she speak and know true life."

The young lord spurred his horse and hastened to Enya’s chamber, where she lay like a lovely wax figure. He loosened her girdle and found the pin in its folds. He burned the girdle and scattered the ashes before the door, and he buried the pin in the earth, beneath a fairy thorn, that no hand would disturb it.

When he returned to his young wife, she looked up at him smiling and held out her hand.

Joyfully he raised her to him and kissed her, and she stood as if no time had passed between them, as if the year she had spent with the fairies was only a dream.

The cut in the hill remains to this day and is called "The Fairy’s Glen."

("Enya the Bride" originally appeared on The Celtic Rose)
Posted by Pat McDermott at 7:16 AM