Nearly everywhere I’ve traveled, I’ve found something Celtic to weave into the stories I write. Last month's Alaskan cruise proved a challenge in this respect. A recent Trinity College Dublin study states that ancient hanky-panky between Irish brown bears and prehistoric polar bears produced the modern polar bear. Would that do? Probably not. It wasn’t until the end of the trip that I found the Alaskan/Celtic connection I needed to enhance my work-in-progress. 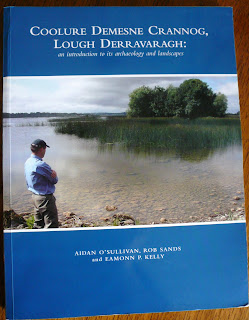 Despite all the shore excursions and cruise activities, I got some work done. Stealing a block of writing time (and a Kir Royale or two) in one of the ship’s secluded spots proved no hardship. By the end of the voyage, I’d managed to draft three chapters of Autumn Glimmer, a young adult adventure set in Ireland, and the sequel to Glancing Through the Glimmer, scheduled for release this November. I’ve spent months reading mythology and archaeology books to spruce up my knowledge of water fairies, lake monsters, and crannogs, man-made islands built in lakes and rivers by prehistoric and medieval people. Fairies and monsters make sense to me. The crannogs do not. 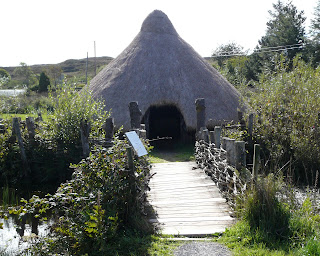 Ten months have passed since I blogged about my visit to the Connemara Heritage and History Centre to view a reconstructed crannog. Archaeologists have dated these lake dwellings to prehistoric times. Written history tells us the Irish still inhabited them during the Elizabethan period, when they served as forts, arsenals, and hideouts. Who first built these strange abodes? And for all the toil it took to construct them, why did they bother?
Theories abound; I’ll note a few here. In Mesolithic times, impenetrable forests covered Ireland. Lakes and rivers served as the people’s highways, and they might have built crannogs as clan gathering places during seasonal festivals. Still, I can’t help wondering why the people didn’t simply fell a few trees and build houses. The idea that they venerated trees and refused to cut them down doesn’t work. They set plenty of tree trunks into the lake beds as foundations for their crannogs.

Did they live on the water because they felt the woodlands belonged to the forest gods they very likely worshiped? Or did they fear the wild boars, wolves, bears, and gigantic, lethally antlered deer who lived in the woods? Perhaps the ancients revered a sun god and had to go out on the lake to commune with him because the dense forest canopy blocked the sky. Then there’s the idea that if clearing land for cattle and crops proved more labor intensive than building crannogs, the people would consider their precious arable and pasture too valuable to waste on human habitation.

Crannogs clearly housed a wide range of social classes over the ages. In addition to weapons, sewing needles, and tradesmen’s tools, archaeologists have unearthed precious objects only the privileged classes could have afforded. The discovery of manacles suggests some crannogs served as prisons. Most experts believe pre-Celtic peoples used crannogs as storage facilities, for shelter and defense, and for platforms from which they tossed votive offerings to assuage lake gods. Some crannogs stood as single structures. Temples or shrines? Others formed entire "water towns." Why? 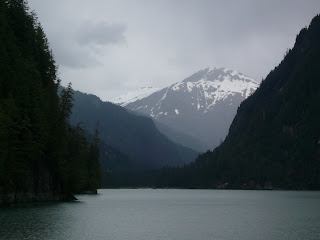 In my recent post describing the end of my Alaskan cruise, I mentioned a catamaran trip to Misty Fjords, a glacially carved wilderness accessible only by boat or plane. In a small inlet called God’s Pocket, the naturalist on board narrated the Native American history of the area. She also described how the mountains teemed with bald eagles, brown and black bears, moose, wolverines, river otters, black-tailed deer, mountain goats, mink, beavers, and foxes. She pointed out a rocky ledge frequently crossed by wolf packs. Spruce, hemlock, and cedar covered the steep slopes right down to the shore. No hiking trails pierced the trees, and hikers who dared to explore the region often lost their way. 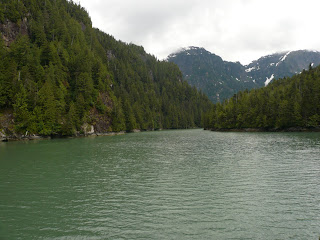 Gazing out at the fiercely beautiful scenery, I sensed an odd kinship with the first crannog builders. I felt eerily safe on the tour boat, and I was only visiting the area for a few short hours. For superstitious peoples living their entire lives in such a ruggedly primitive world, a crannog must have imparted an otherworldly sense of security, a mystical, life-giving refuge whose protective waters provided food and simplified travel.
I already have my lake monster and a troop of mischievous water fairies. I think I’m good to go.
Posted by Pat McDermott at 5:06 PM