Alaska’s Gastineau Channel, a prized fishing ground for the native Alaskan Tlingit people for thousands of years, provides the scenic setting for Juneau. The capital of Alaska since 1906, this former mining town came into being shortly after two prospectors, Joe Juneau and Richard Harris, arrived in 1880 and learned from Chief Kowee of the presence of gold in a nearby creek. By the mid 1940s, gold mining had declined, leaving the government as the basis of Juneau’s economy. Alaska became a state in 1959, and plans to move the capital to a larger city fell through. Today the lucrative trades of fishing and tourism augment the business of governing the state. 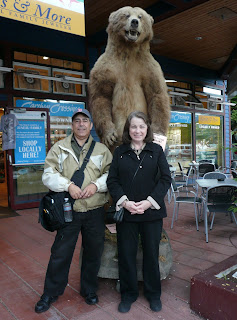 We began our tour with a stroll along the city’s main street and visited lots of gift shops, some touristy, most exhibiting lovely works of locally produced art. At a row of tour stalls on the pier, we booked a bus tour to see both the city and the famous Mendenhall Glacier, a dazzling frozen river that sprouts from the Juneau Icefield.
The next day, the Symphony docked at Ketchikan, the "Salmon Capital of the World." The busy harbor teemed with seaplanes and boats, and though the frontier streets beckoned, we wouldn’t have time for a stroll through the town, much of which perched on pilings over the water. We had booked a 5-hour catamaran cruise to Misty Fjords National Monument.

Ketchikan also bears the dubious distinction of the "Rain Capital of Alaska." We began our tour in the covered top deck wondering if the drizzly gray skies would be with us all day. Soon, we were out on deck, for the weather cleared as we made our way through a lush green wilderness carved out by glaciers. Using an entertaining storytelling style, a knowledgeable naturalist told us of the geology, ecology, and history of the areas we visited. For me, Misty Fjords, which provides a breathtakingly beautiful habitat for bald eagles, wolves, bears, deer, moose, fox, and goats, and other sea and animal life, was the highlight of the cruise.

We spent two relaxing days at sea returning to San Francisco and the Golden Gate Bridge, enjoying the Captain’s Formal Farewell dinner along the way. We’d had a wonderful time, seen lots of gorgeous scenery, eaten some great food, met new friends, even played a game of Mexican Train Dominoes with my aunt and uncle. I hope to enjoy another Crystal cruise one day and hear Louie Armstrong warbling "What a Wonderful World" as the ship departs each port. 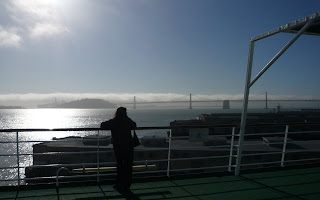 Posted by Pat McDermott at 9:15 AM