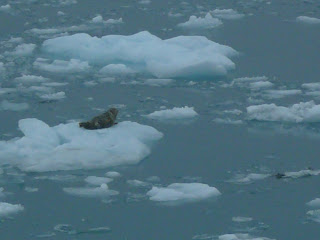 We woke to find the sea filled with good-sized chunks of ice, some with seals aboard. The captain announced that the icy conditions ruled out our scheduled trip to the Hubbard Glacier. Though disappointed, the passengers made no complaint. We sailed out to sea and on to Skagway.
At the height of the Klondike Gold Rush, prospectors entered the goldfields through Skagway. Surrounded by snow-capped mountains, this frontier town sits at the head of the Taiya Inlet on the northern end of the Lynn Canal, a fjord on Alaska’s Inside Passage. Skagway derives its name from Schkagua, a native Alaskan Tlingit word meaning "Home of the North Wind." The wind blew nonstop as we strolled along the old-fashioned boardwalks, and the locals told us it does so every day of the year.


The restored buildings look as they did in the late 1890s, when Skagway was the largest town in Alaska. A few saloons remain, but most of the businesses are geared toward tourism now. We visited several jewelry and souvenir stores and the museums tucked between them. 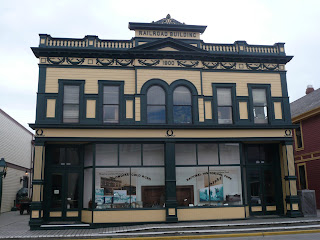 Nothing special in the jewelry stores, I thought. Then I spotted a display of ivory jewelry carved from woolly mammoth tusks. I had to ask about it, as I thought such relics would be in a museum. The store owner told me that mastodon and mammoth tusks still turn up everywhere in Alaska, most notably in river beds, where they pop out as the soil washes down. Depending on whether the tusks are found on private, public, or federal land, forms are filled out, the paleontologists have a look, and if they don’t want it, the finder of the tusk is free to dispose of it as he or she wishes.

Next up: Juneau
Posted by Pat McDermott at 2:56 PM