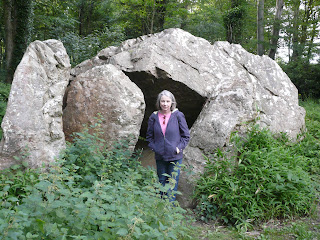 When my husband and I arrived in Ireland last month, we opted to spend two days in Howth, a village nine miles north of Dublin. If you’ve read my previous posts, Howth Therapy and Heavenly Howth, you know that Howth is one of my favorite places, a very inspiring spot. Its dramatic cliffs and lovely harbor served as a backdrop for my young adult novel, Glancing Through the Glimmer. 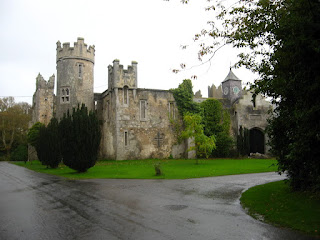 During this latest visit, we stayed at the lofty Deer Park Hotel above Howth Castle and took the train into Dublin to raid the bookstores and museums.

﻿Walking trails run through the hotel grounds and beyond. One of those trails leads to Aideen’s Grave, a portal tomb I’ve wanted to see for some time. A hearty walk through woods thick with rhododendrons brought us to the ancient stone monument, one of seven portal dolmens in the Dublin area. 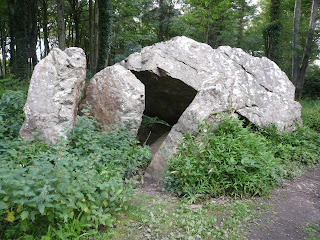 The tomb dates from 2,500 BC - 2,000 BC, and the quartzite capstone, 6 feet thick, 17 feet long, and 12 feet wide, weighs more than 70 tons. Over time, the capstone has partially collapsed, though it’s still an impressive sight. 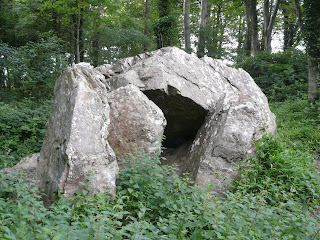 The tomb is supposedly the burial place of Aideen, daughter of Aengus of Ben Edar. Apparently, poor Aideen died of a broken heart when her warrior husband, Oscar, son of Oisín and grandson of Finn MacCumhaill, perished at the Battle of Garbha. Her father-in-law, Oisín, buried her with great ceremony on Howth Hill. Or so the story goes. 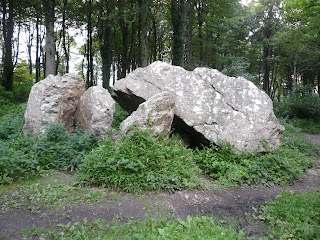 If you don’t care for that legend, you might prefer the one that says the mighty Finn MacCumhaill tossed the stones from the Bog of Allen in Kildare all the way to Howth during a game of quoits.

Posted by Pat McDermott at 7:51 PM