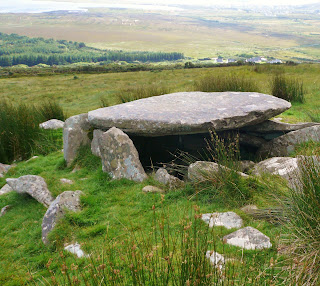 During a visit to western Ireland a few years ago, I marveled at how our tour bus maneuvered around the narrow, winding lanes and steep cliff roads of Achill, Ireland’s largest offshore island. The tour had limited stops, but I saw enough to want to go back, especially since I was writing The Rosewood Whistle, a story partially set in this remote but gorgeous place. The name Achill is thought to stem from eccuill, the Irish word for eagle. Sadly, eagles haven’t been seen there since 1912.

In the summer of 2012, we returned to Achill. My husband drove those high cliff roads, and we stopped wherever we liked. Our drive from Westport took us north, around Clew Bay and through Newport and Mulranny, quaint little Mayo towns with lots of scenic views. We reached the island by crossing the Michael Davitt Bridge, which resembles a big white rib cage. 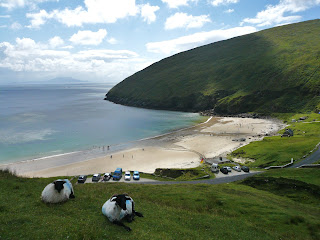 The scenery soon became a blend of desolate and spectacular. We passed stretches of bogs strewn with stooks, stacked sods of cut turf drying in the sun or beneath sheets of white plastic. Since we had the sun for the moment, we headed west, all the way to Keem Bay. From a lofty vantage point shared with sheep, we admired the horseshoe-shaped beach, one of the prettiest I've seen.

Most of the road signs were written in Irish, as most of Achill is in the Gaeltacht, an area dedicated to the preservation of the Irish language. When we stopped for lunch at a restaurant claiming to be the westernmost pub in Europe, I overheard a woman speaking in Irish to her young daughters, who answered in English, though they clearly understood what she said. We struck up a conversation (in English), and she explained that she and the kids were attending an Irish language school, something they did every summer. 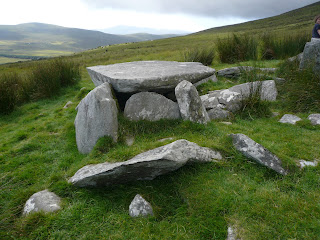 After lunch, we went hunting for tombs. According to the archaeologists, people have lived on Achill since Neolithic times. Megalithic tombs on the southern slope of Slievemore, the island’s second highest mountain, date to around 4000BC, and we managed to track down the 5,000-year-old Keel East Court Tomb. (A court tomb is one with an open "court" area thought to have had a ceremonial purpose.) This one was a good hike up a steep path, but well worth the trek. We enjoyed fantastic views of Keel Lough and Clew Bay.

Why did the Neolithic people who lived here place their tombs so high on the mountainside? One theory states that heavy forests covered Achill Island when the tombs were erected, and the people chose to inter their dead above the tree line. For more information on this and other ancient Irish tombs, stop by Philip Powell’s wonderful site, Megalithic Monuments of Ireland. 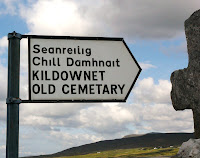 Our next stop was Kildavnet (Kildownet) Cemetery. The tour bus had stopped here years before, and the place has haunted me since. The graveyard is the final resting place of thirty-two young people who drowned in the Clew Bay sailing disaster of 1894. The train that brought their coffins from Westport to Achill fulfilled a prophecy made by 17th century Irish seer, Brian Rua Uí Cearabháin (Red Brian Carabine). Brian Rua foretold that carriages on iron wheels blowing smoke and fire would carry corpses on their first and last journeys to Achill. 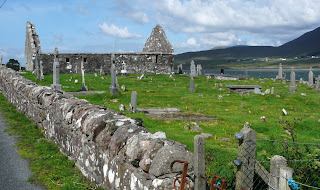 Sheep wandered through parts of the cemetery, some rubbing their flanks and butting their heads against timeworn tombstones, others munching the grass around the ruins of an ancient church named for St. Dymphna (Damhnait). 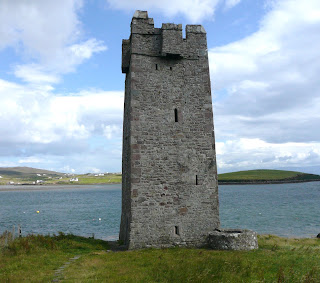 A little farther down the road is Kildavnet Castle, one of many medieval tower houses around Clew Bay used as a base of operations by Pirate Queen Grace O’Malley. 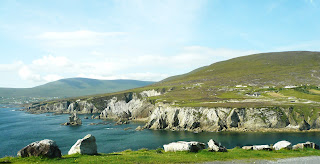 We followed part of the Atlantic Drive and viewed more breathtaking cliffs that looked out over Clew Bay and the shimmering ocean beyond, and then we returned, quite contentedly, to Westport.
Posted by Pat McDermott at 9:24 AM