Browsing through bookshelves to find new gems has brought me to bookstores wherever I go. A recent escape to Dublin provided my latest treasure hunt. Over five days, I visited several familiar shops, as well as a few that were new to me. My adventures blended research for a new story with a wonderful sightseeing tour.
On my first day in the city, jet lag kept me close to the hotel, chosen for its proximity to the City Centre. I strolled to the National Museum on Kildare Street, one of my favorite Dublin haunts. They have a great gift shop with a unique selection of books on history and archaeology. I was after the Vikings of medieval Dublin this time, and neither the exhibits nor the gift shop let me down.

From Kildare Street I turned down Dawson Street. Once upon a time, Eason, Waterstone’s, and Hodges Figgis were there in a neat little triangle. Now only Hodges Figgis, one of Dublin’s oldest bookstores (est. 1768) remains. After exploring their famous bargain basement without success, I went upstairs and found a new history of the Battle of Clontarf and a couple of poetry books.
﻿

Around the corner on Nassau Street is a music store called The Celtic Note. No books there, but I always love rifling through their wealth of Irish music. I left with several CDs and proceeded to Reads, a bookstore across from Trinity College. Usually, I find a good assortment of magazines I can’t get back home. No luck this time, nor did I have any at Dubray Books on Grafton Street. I really enjoyed exploring the antique tomes in Cathach/Ulysses Rare Books on Duke Street, but I came away empty-handed.


Fully rested the next day, which happened to by my birthday, I ventured onto the Hop On/Hop Off bus, a good way to get around Dublin without spending a fortune. Research brought me to lovely Phoenix Park, one of the largest enclosed ‘capital city’ parks in Europe. The Visitor Centre provided an informative exhibit of the park’s history. After leaving Visitor Centre, I stopped by the gate to the U.S. Ambassador’s Residence, the home of the heroine in my young adult "Glimmer" books. My trek back to the park entrance along Chesterfield Avenue brought me by Áras an Uachtaráin, the home of the President of Ireland.

The O’Connell Street area came next, and that meant Eason, another favorite bookstore. I found plenty of genres to browse through but only bought a history of Phoenix Park, a book of ghost stories, and some fairy tales I didn’t already have. A quick trip over the Ha’penny Bridge brought me to Temple Bar, where I enjoyed a very decent lunch at Gallagher’s Boxty House. I mentioned that it was my birthday, ordered a glass of white French burgundy, and received a glass filled right to the top!

On my way back to the hotel, I visited the small but fabulous Books Upstairs, opposite the entrance to Trinity College. This bookshop has one of the best selections of poetry I’ve seen on either side of the Atlantic, and the owner said she prides herself in keeping her stock up-to-date. Good for me! I added four books of contemporary poetry to my rapidly growing hoard. 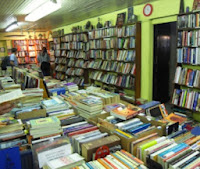 On Wicklow Street, I hunted down the Secret Book and Record Store, hidden in a little mall and well worth seeking out. It’s stocked with tons of previously owned books, scattered on tables and shelves all over the place. A browser’s dream, it would have required more time than I had that day. I planned to return before I left town, but the agenda didn’t allow it. Next trip for sure!

﻿﻿
Back to the Hop on/Hop Off bus the next day. I paid a repeat visit to Dublinia, the Viking museum near Christchurch Cathedral. My current research centers on the coins and moneyers of medieval Dublin, and I found some interesting info there. Nice gift shop, but not many books. Mostly coloring books for kids. The curator suggested I visit the Revenue Museum, which I didn’t know existed. It’s in Dublin Castle, but it’s only open Monday through Friday. Sadly, my Friday agenda left no time to visit, and I had to leave Monday morning. Next time!
The bus brought me to Kilmainham Gaol (Jail), nothing to do with research, but I’d never been and I wanted to see it. Glad I did. A very moving tour indeed.

I’ll say nothing about the silly Leprechaun Museum on Jervis Street, except that I took the tour.

One of my best discoveries was Chapters, a fantastic bookstore at the Ivy Exchange on Parnell Street. So many books, so little time. I found an amazing account of the history of Ireland’s coinage, along with a few other treats. By now, I had started to worry that my new acquisitions wouldn’t fit in my suitcase, which I’d underpacked to leave room for books and Lyons tea. I’ve mailed books home from Ireland more than once, but I wouldn’t get to the post office before Monday morning. I decided I could throw my clothes away if necessary.

Saturday’s tour involved a train ride on the DART to Malahide, a delightful seaside community north of Dublin. I paid a return visit to Manor Books on Church Road, preceded by a first-time visit to Village Books on Townyard Lane. Both shops left my backpack heavier, and I would have loved having tea in the village. However, that agenda of mine put me back on the train, this time to Howth, another seaside village, one I’ve blogged about often. 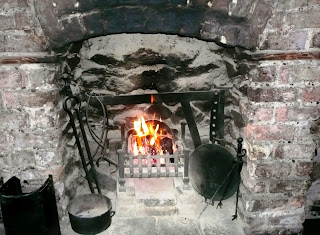 A chilly October day near the sea made me glad I’d brought my gloves and earmuffs. A small building on the main road sported a Book Sale sign, but the tables had been picked over pretty well. I headed to the old Abbey Tavern for lunch and a magical turf fire that warmed me up nicely. From the DART station back in Dublin, I strolled through the Merrion Square area and found a bookstore near Stephen’s Green that wasn’t on my list. It’s called either Robert’s Wholesale Books, or Books Books Books. It looked like a store that won’t be there the next time I visit, but I found a few goodies.

I’d walked a minimum of five miles each day. Rambling all over town was no hardship, and I’d really lucked out with the weather. Sunday morning, I returned to Temple Bar and checked out the open air book sale run on weekends. Then I explored the "new" end of Temple Bar, stopping by The Gutter Bookshop on Cow’s Lane and coming away with a two new books. A few more joined them after a stop at the Oxfam Ireland Bookstore on Parliament Street, a neat little place for secondhand books. On I went to see Fishamble Street, where part of the opening chapter of my new story takes place. From there I strolled to Lord Edward Street, over to Dame Street, and back through the City Centre, enjoying my last full day in Dublin.
Posted by Pat McDermott at 5:45 PM