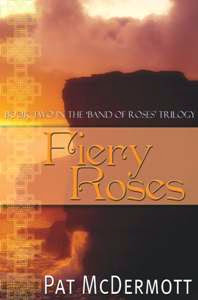 Blackmail and murder hardly make Fiery Roses a story for children. Yet a few vibrant moppets have stolen their way into this action/adventure fantasy set in an Ireland that might have been. Why include children in an adult story?

A child’s perspective can ease the tension, offer a simpler point of view, or add a touch of humor as it furthers the story along. In this excerpt, two girls amuse a reporter.

The sight of two red-haired demons bicycling straight at her frightened her until she realized the skinny legs pumping the pedals belonged to freckle-faced Mary Margaret Gannon and her sister Joanie.

"Allison! Allison!" Little Joanie skidded to a halt, braking with the toes of her sneakers. "An old, old man is visiting Aunt Betty. He must be a hunnerd-an-ten!"

Mary Margaret backpedaled to a stop. "He came to see her garden." Holding the handlebars, she straddled her bicycle and sighed. "He said none of the flowers in her garden was as beautiful as her, and then he kissed her hand."

"He’s going to court her," squealed Joanie. "Wait till we tell Daddy!"

No secrets with kids around. Then we have the adult character who flashes back to childhood. I used this trick to help readers understand Neil Boru, the adoptive cousin and newlywed husband of Princess Talty. Here, he shares a haunting memory of his first meeting with his grandmother.

"‘Come here, boy’, she said. ‘Let me look at you.’ My mother gave me a nudge, and I went and stood in front of Bridget." His eyes shut tight at the recollection. "I thought she was a witch, Tal. I can still see her weird purple eyes staring at me, never blinking. Then she said, ‘You look nothing like my Frank.’ She only spoke to my mother after that. While we were having tea, she said, ‘He’s left-handed. That’s no good,’ and other equally endearing things."

Fiery Roses takes Neil and Talty to a parallel world, where they meet Kavie, a darling eight-year-old who gives Talty a chance to demonstrate her archery skills.

Kavie stood with his back to the sun, shooting arrows into, or at least near, a moth-eaten hide thirty yards in front of him. Pieces of straw peeked from beneath the target, an old boarskin shaped to somewhat resemble the unfortunate boar who had once owned it.

Smiling at his comical lack of skill, she waited until he reached for an arrow before she spoke. "Hello, Kavie. You’re up early. Practicing your shots, are you?"

"Good morning, goddess," he said in his squeaky but endearing young voice. "I’m going to be a great hunter, like Papa."

"That will take lots of practice and hard work."

Kavie will have a chance to prove his bravery, as will little Joanie, and yes, even Neil. The children’s presence undeniably enriches the plot of Fiery Roses. I’m glad they insisted on jumping aboard.

Fiery Roses, Book Two in the Band of Roses Trilogy, is available in print and eBook on Amazon, as are Book One, A Band of Roses, and Book Three, Salty Roses. Additional excerpts are available on my website.

Posted by Pat McDermott at 8:57 AM