The Band of Roses Trilogy - Adventure and Romance in Ireland 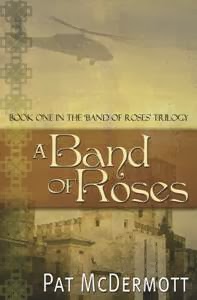 April 23, 2014 marks the 1000-year anniversary of Ireland's bloody Battle of Clontarf. On Good Friday in 1014 A.D., the armies of High King Brian Boru challenged a host of Vikings and their allies on the plains of Clontarf, north of Dublin. Though Brian’s troops were victorious, he was murdered by fleeing Vikings as he prayed in his tent.

Many historians have speculated that Ireland would be a different place today if King Brian had survived the Battle of Clontarf. The Band of Roses Trilogy, a romantic action/adventure series set in modern Ireland, supposes he did survive and established a royal dynasty that still rules the Emerald Isle. The current King Brian upholds ancient traditions, as does his daughter, Crown Princess Talty, though Talty has a knack for landing in trouble. She wishes she were anyone but the heir to her father's throne—and she learns to be careful what she wishes for. 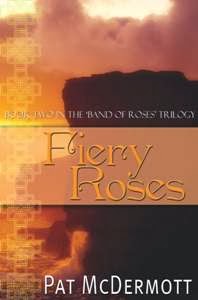 In Book One, A Band of Roses, Talty must hide her identity to outwit assassins, but she can't hide her ingrained training as a warrior sworn to protect her homeland. From Japan to California to an eleventh century Ireland, she finds romance and adventure, yet all she wants is to return to her family and Neil Boru, the adoptive cousin she secretly loves and cannot have—or so she thinks.

In the second book, Fiery Roses, the discovery of offshore gas ensnares the Boru clan in a web of blackmail and murder. When the residents of rural County Mayo object to pipelines on their land, an arsonist tries to change their minds. One of his fires sends newlyweds Talty and Neil to an ancient world at the mercy of a waking volcano, where they must fight not only to survive, but to save their fledgling marriage. 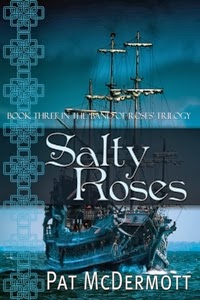 Book Three, Salty Roses, finds the dynamic princess believing her days of adventure are over. Her royal duties seem endless, and a day off with Neil is looking good. The royal couple accepts an invitation for a jaunt aboard a luxury submarine. As they view an eerie shipwreck, an unknown enemy lures them to an ancient tomb and sends them to a world infested with treacherous pirates. Talty takes charge of a pirate ship and its mangy crew, while Neil matches wits with a temptress who jeopardizes his wedding vows.

In this Excerpt from A Band of Roses, a military assignment teams Talty with her 'Veddy' English commanding officer, Richard Gale, who knows her as Major Christy McKenna. In an experiment gone wrong, they arrive in our world in 1014 A.D., just before the Battle of Clontarf. They've met a lady named Leesha, whose handsome son Gayth has his eye on Talty. In this scene, Gayth is leading his Dalcassian clan to aid King Brian in his fight against the Vikings—but Gayth has more than warfare on his mind.

* * * * *
For three rainy days, the Dalcassians rode two hundred strong. On the third day, Gayth called a stop to rest. Talty and Richard tethered their horses and made their separate camp. While Richard prepared a fire pit, Talty rummaged beneath the shrubbery to find dry wood.

“Can’t we cheat and use matches, Richard? I’m tired of being cold and wet.”

“So am I.” Richard poked through his toolkit until he found the waterproof matchbox. When the fire was burning well, they finished the last of their oatcakes and ale.

“So here I am, the protector of a holy woman. Who knew?”

Talty winced. She regretted agreeing to the deception. Gayth had told the men her presence would protect them. “I wish Leesha hadn’t started this. I’m not some saint who can heal battle wounds with a touch.”

“They don’t know that, darling. We have an edge as long as they think you’re no ordinary woman. Why did she say that, anyway?”

“She was afraid I’d spirit Gayth away to fairyland. She needn’t have worried, though. He seems able to resist me just fine.”

“Perhaps you married too young to learn how devious men can be. Our friend Gayth isn’t finished with you, holy woman.”

Gayth stepped from the darkness. “My kinsmen are grateful for your fire. The furze is too wet to burn. They invite you to join them in a game of spear fishing, Richard. There’s salmon nearby, and we need the food as well as the sport.”

Talty bristled at Richard’s protectiveness. “You should get to know the men. I’ll be safe enough at my prayers.”

Gayth’s chocolate eyes sparkled in the firelight. “I will stay and protect you while you pray.”

Still smiling, Richard found a spear and went off to fish. Though Talty had encouraged him to go, his abandonment annoyed her. “I’m going to pray beside the pond. It could be a watering hole for game.”

“Even holy women must eat.” She left him by the fire and was soon scanning the ground at the edge of the pond. The twilight’s glow revealed animal tracks in the rain-damp soil. She walked toward a dense stand of trees, not quite sorry that Gayth and his sparkling eyes had caught up.

“Did you see any tracks?” he asked.

“Yes. Deer, I think. Smaller game as well, and I’m sure I heard waterfowl a while ago.”

“I like roast goose. Can you pray for some?”

Silently groaning, she studied the sky. “Do we have time to roast meat?”

“The men must eat. Once we’ve rested and refilled our food sacks, we’ll ride again. We should reach Dublin in three, maybe four days’ time.”

“Monday of Holy Week. What holy woman wouldn’t know that?”

Barely aware of his teasing tone, she supposed they could reach Dublin by Good Friday, though that would be cutting it close. Yet in this world, the Battle of Clontarf might not take place on Good Friday. Perhaps no battle would occur at all. Perplexed, she stole into the trees.

“This will make a fine blind.” She spoke more to herself than to Gayth.

“You intend to wait here for deer? Praying?”

Ignoring him, she returned to the fire to bank the embers and fetch the Viking bow.

Gayth was right beside her.

She slung the quiver and arrows over her shoulder. Her hooded cloak went on next to protect both her and the bow from the weather.

Her preparations seemed to mystify Gayth. “Why don’t you simply rush the herd and cast a spear when they bolt?”

“This way I’ll get the deer I want, not one who falls behind because it’s old or sick.”

They stood in the natural blind together and watched the water’s edge. She didn’t resist when he pulled her against him.

He wrapped his cloak around her. She leaned against him, breathing in smoke and sweat, banishing all thought until a small herd of deer appeared to investigate the clearing. Though tempted to forget them, she broke away from Gayth and uncovered her bow. Silence was critical now.

He caught her face in his hands and kissed her well. After the briefest pause, she kissed him back, grateful for the fading light that hid her burning cheeks. Then she nudged him away. The deer wouldn’t tarry long.

Kiyoshi’s words flowed back to her: See the target as a reflection of your mind, as a mirror. Your mind will find the target.

Gayth stepped back. Talty fixed on the biggest doe in the herd. She drew without breathing, released, and held her position until the arrow pierced the doe’s side.

Shot clean through, the doe hovered over the ground for the briefest moment before collapsing in a motion so natural, the other deer failed to notice. The arrow’s strange whoosh had alarmed them, however. They scattered into the forest.

Pleased with her success, Talty lowered her bow. The kiss that lingered on her lips unexpectedly angered her. “Why are you here, Gayth? You ran from me before.”

“I ran from a holy woman. Your warrior skills bestir most unholy thoughts in me.”
* * * * *
Thanks for reading!
Pat

(This post originally appeared on The Celtic Rose)
Posted by Pat McDermott at 8:29 AM