Ireland abounds with stone monuments built by prehistoric tribes to help them divide the year into seasons: Samhain, November 1, the start of winter; Beltane, May 1, the first day of summer; Lughnasa, August 1, the beginning of autumn; and, Imbolc, February 1, the glorious arrival of spring.

The Newgrange passage tomb is famous for its roof box, which allows sunlight to penetrate its interior chamber during the winter solstice. A Neolithic mound in County Sligo’s Carrowkeel cemetery has a similar box that lets light in during the summer solstice. On the Hill of Tara, sunshine illuminates the chamber inside the Mound of the Hostages on both Samhain and Imbolc.

In ancient times, spring arrived during the first week of February. Imbolc (from i mbolg, old Irish for "in the belly") refers to the impending birth of lambs and calves, a time of renewal, the start of the agricultural season. The celebration belonged to the Celtic goddess Brigid, daughter of Dagda, the Irish equivalent of Jupiter, Zeus, or Odin.

Brigid was a triple deity, a benevolent mother goddess of healing, fertility, and fire, as well as the patron of poets and smiths. When Christianity arrived in Ireland, the church superimposed its saints and holy days over many pagan deities and festivals. Brigid became St. Brigid (Bridget, Brigit, Brighid, Bride, Brid), the female patron saint of Ireland, guardian of hearth and home. Born in the 5th century, she became a leader of the early Celtic Christian church. Her feast day, February 1, is the first day of spring in modern Ireland. 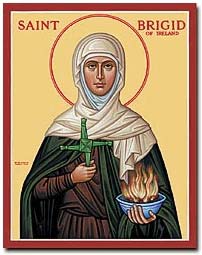 Brigid, said to be the daughter of a druid, supposedly fed on the milk of Otherworld cows, a rumor that gave her dual authority over both Christian and pagan ways. A generous woman, she fed the poor and tended both cattle and land, and is often portrayed with a cow at her feet. She became a nun and founded convents and monasteries. Of the many legends associated with her, my favorite is her acquisition of the land on which she built her most famous monastery.

In 470, Brigid petitioned the King of Leinster for some prime property. Thinking himself clever, the king said he would give her as much land as her shawl could cover. Brigid took off her shawl to measure the land, giving each of the four nuns with her a corner of the cloak. The women ran north, south, east, and west, and the shawl stretched to cover acres of land. Her monastery, built near a huge oak tree, became known as Cill Dara, the Church of the Oak. Cill Dara is now the Town of Kildare.

St. Brigid’s Cross, one of the best-known symbols of Ireland, is still made from rushes on St. Brigid’s Day to ensure health and prosperity in the coming year. The practice hearkens back to Brigid’s attendance at the deathbed of a pagan chieftain, who was curious about the new Christian religion. She drew rushes from the floor and wove them into a cross, and when she told him of its origins, he converted to Christianity.

Whether goddess or saint, Brigid symbolizes the renewal of life and the hope of abundance, and Christians and pagans alike still honor her on her day.
Posted by Pat McDermott at 2:57 PM