Some years ago, on a late autumn day, my mother asked me to accompany her to Ireland to visit her elderly parents. She said no more, except that we must waste no time. As I am a dutiful son and well versed in the ins and outs of travel, I gently guided the dear lady from Boston to Shannon on the next available flight.

Throughout the journey, she sat in silence, locked in some private distress. Black clouds greeted us on the other side of the Atlantic, though the wind-driven rain subsided as I drove our rental car south. The sun’s reappearance cheered me. My mother, however, brooded during the entire drive. After several unsuccessful attempts to learn the cause of her anguish, I resigned myself to a quiet ride.

We reached Killarney an hour later. I slowed the car to negotiate the narrow streets, taking in the colorful shop fronts and horse-drawn carriages. Then I drove on to the house my mother left when she married my father thirty years earlier.

The family homestead sat in solitary splendor on ten County Kerry acres. A circular driveway took us past well-landscaped grounds to the front door. Despite the lovely setting, My mother stared at the dwelling with unmistakable dread.

My nimble grandmother greeted us with her customary warmth, yet her lilting accent held no cheer. The pleasant aroma of pipe tobacco announced my grandfather’s presence. Sure enough, the old fellow emerged from his study and greeted us with hefty hugs, adding an arm-wrenching handshake for me. He didn’t seem to notice my grandmother’s solemn demeanor.

“Come in, Nora!” he bellowed. “Come in, Brody! Get those coats off and we’ll have tea!”

My mother’s eyes glistened; her lip trembled. I had lost patience with her reticence and resolved to learn what was afoot if I had to bully it out of her.

Hefting our luggage, I led my mother upstairs. As always, she claimed her childhood bedroom. I set her bag on a chair. “What’s happening here, Mum?”

She closed the door. “I didn’t want to tell you before, Brody. You wouldn’t have believed me, and I couldn’t bear your teasing.”

She held her breath before she continued. “Your grandmother heard the banshee.”

I didn’t tease, but I couldn’t keep my eyebrows down. “Has she? What about Pa?”

“He hasn’t heard it. The one the banshee cries for never hears it. I know you don’t believe it, Brody, but I’m afraid for my father.”

I thought of the burly man downstairs and smiled. Even at his advanced age, he was stronger than most men I knew, including me. “You’re worrying for nothing. Let me put my bag away and we’ll go down for tea.”

I chose my favorite guest room, a small but well appointed suite that overlooked the front entrance and afforded spectacular views of the gardens. Pulling the red velvet curtain aside, I enjoyed the scenery until the rain abruptly returned in raging torrents. The wind howled and moaned, as it would in such an open area. I understood why my grandmother believed she had heard a banshee.

According to legend, the eerie wailing of these spectral females supposedly heralds death. My mother often said she had heard one the night my father died. Such superstitions—peculiar weather omens, outlandish remedies, and charms that guaranteed spouses and wealth—had always amused me. My mother, however, believed in such things. On her kitchen wall, a horseshoe still hangs “points up” to keep the luck from running out, for all the good it has ever done her.

My own beliefs were centered in science. After earning a business degree, I joined a high tech firm and traveled often to visit its worldwide branches. My level-headed logic would help calm the ladies’ fears during this gloomy visit. I released the curtain and went downstairs.

In Ireland, they call supper “tea.” The housekeeper had set out the simple meal in the dining room, where a gas fire danced in an ornate hearth. We chatted our way through scones, salad, ham, and potatoes. My grandmother had just called for dessert when a loud knock sounded at the front door.

The women froze. Pa, however, seemed oblivious to the rapping. He continued telling a favorite story of his boyhood. As I had heard the tale often, I permitted my attention to drift. Why would someone use the knocker rather than the doorbell? When the housekeeper failed to answer the knock—no doubt she couldn’t hear it from the kitchen—I set my napkin on the table, strolled down the hall, and opened the door.

No one was there. I returned to the dining room and stated my opinion that the wind had caused the rapping.

Pa was lighting his after-dinner pipe. Through his initial puffs, he said, “That’s what I think, Brody. We old folks don’t hear so well anymore, and the wind plays tricks on your grandmother.”

He resumed his tale. His old briar pipe was well-fired now. He held it by the bowl, waving it to emphasize the key points of his story. Outside, the wind still howled.

Without warning, the howling rose to a ghastly shriek that burst into pitiful, piercing cries. The women grew pale, but Pa continued his narrative, clearly deaf to the paranormal screams that gripped his wife and daughter in breathless horror. I must confess that an unknown terror chilled me as well.

The hideous lamenting ceased just as Pa concluded his yarn. He chided the women for fearing the wind and weather. Soon we all rose and retired for the night. Despite the mysterious keening—whatever it was, I doubted any supernatural visitation had occurred—jet lag had left me exhausted. I fell straight to sleep. 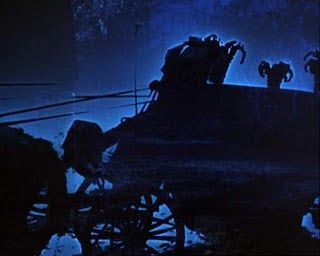 Several hours later, I awakened to the clip-clop of horses and the rumbling of a rolling carriage. The bedside clock read three a.m. Who would be coming at this hour in a horse-drawn cart? I stole to the window and pulled back the velvet curtain.


Outside the front door, not one, but two horses stomped the ground before an old-fashioned carriage set on high wheels. A coachman in antique attire sat in the driver’s seat. The brim of his top hat hid his face. Thinking that the window glass might be distorting whatever was really down there, I lifted the sash. Cold air blew away the last remnants of sleep. I decided I was witnessing a costume drama.

I watched spellbound as two men attired like the coachman carried a shapeless black mass from the house. The carriage door opened. With calm efficiency, they hauled their burden inside.

The door snapped shut. The coachman cracked his whip and shook the reins. He glanced up. Our eyes met. His skeletal face contorted into a hideous, mocking smile. He touched his whip to the brim of his hat and cried, “Come aboard, sir! There’s plenty of room!”

Too shocked to speak, I made no response. He let go a high-pitched titter and drove off into the starless mist.

I paced my shadowy room until I convinced myself that I had experienced a nightmare. The lingering horror crumbled away. I found my bed and fell into a dreamless sleep.

Just past nine o’clock, I prepared for the day and went downstairs. The sound of strange voices surprised me. In the kitchen, my weeping mother and grandmother sat with uniformed emergency personnel whose calm demeanor belied any emergency.

My mother stood and hugged me. “Your grandfather is gone, Brody. He died in his sleep and suffered no pain.”

I didn’t believe it. “Why didn’t anyone call me?”

I raced up the back stairs to my grandparents’ room, where doctor and priest conversed in low tones. The shell of my grandfather lay on the bed, his hands folded on his chest, his forehead glistening with the holy unction of last rites. I knew then that a death coach had stolen away my precious Pa.

For months, the events of that night haunted me. I never mentioned the costumed coachmen. My level-headed logic eventually convinced me that some trick of the imagination had deceived me, that the death coach had been a dream after all.

A year later, I was in Boston when the news came that my grandmother had followed my grandfather to eternal rest. No wailing banshee accompanied her passing, at least not on this side of the ocean, and not because the banshee couldn’t cross the sea. I convinced myself that the banshee only existed at all because legend and the mysterious Irish landscape had joined forces to plant her in generations of imaginations.

Twenty years have passed. I am president of my own electronics company now. A year ago, I established a division in Dublin. After several transatlantic trips to oversee the startup of my new branch, I visited Ireland’s capital to attend the theater festival.

A howling, wind-driven rain greeted me when I arrived at Dublin Airport that autumn afternoon. I had a flat in the city center and carried only an overnight bag. I waited at the stop for the Dublin shuttle. The minibus pulled up. The door opened, and the passengers shifted politely to make space for me.

“Come aboard, sir!” called the driver. “There’s plenty of room!”

My half-raised foot stopped in midair. I looked into the same eyes I had seen in Kerry twenty years before. The same skeletal face with its hideous, mocking smile stared back at me, as it had then.

Was I the only one who had heard his high-pitched titter?

Transfixed, I watched the shuttle drive away. It stopped before turning out of the airport and onto the main road. Just as it pulled out, a speeding fuel truck slammed into it. Both vehicles burst into flames.


(Brody's Banshee is loosely based on an old story by the late Shane Leslie. Pictures courtesy of Photobucket.)
Posted by Pat McDermott at 7:08 PM